You already know I have ADHD. Like most adult women with ADHD, the Hyperactive part of my ADHD expresses itself partially as anxiety. Unrelated to the ADHD I also have a condition called hyperekplexia (stiff baby syndrome for you medical folks) that results in me making little noises I call eeps that sound like a baby panda hiccuping. Technically I eep when I’m startled, but it works out to a correlation between rate and volume of eeps and my anxiety levels. However, because I have that whole ADHD-related anxiety thing, anxiety levels don’t always relate to real world events for me. As I told my best friend the other day, I can rationally tell myself “Beth, that’s a silly response. Everything is fine. There’s no way Toby will figure out how to move the lock and escape into the hall, make it into the elevator, and run into the street in front of a car while you’re at work” and yet the anxious part of my brain, fueled by ADHD hyperactivity turned inwards doesn’t give two pennies for rational thought and just says “that’s nice, but still, he’s a smart kitty, he could!” and ignores reality.

What does any of this have to do with animals as this is a blog ostensibly about animals? Because animals are amazing for my anxiety and the mental illnesses of many people around the world. There are local and international organizations that organize visits from dogs, cats, and other pets to people who can benefit from the experience. Research has shown that petting cats helps lower people’s blood pressure, which can relieve feelings of stress.

For me there’s definitely the physiological benefit of petting Toby being calming and soothing. A lot of it for me is that even if the things I’m worrying about happen (aside from any involving Toby hurting himself), Toby will still love me. Even when the crazy part of my brain can’t listen to the rational side that says my fears are baseless, it can still recognize that Toby’s love is in no way dependent on those things being untrue. Even if I wake up 40lbs heavier and get fired all in one day, Toby will still love me. I can believe in him, even when I can’t believe in logic.

Last night when I was feeling particularly anxious (it’s been a bit high the past week) he came over and curled against my leg while I watched Monty Python. The night before when I woke up from a nightmare, he climbed onto the bed and curled up next to me. He’s not always the most cuddly cat, but he knows when I need extra affection and he makes it clear that he loves me. Toby, like all pets, has a lot to teach us about unconditional love. This evening he licked my hand when I went to pet him.

Even though I might bribe him into cuddles this evening with treats while I read, I’ll still know he loves me. Even if he’d rather stay on the comfy nest of clothes he’s created for himself. 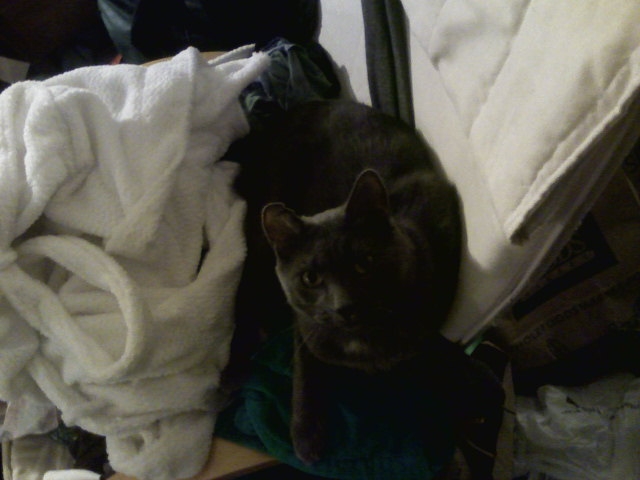 Note: My inclusion of the personal here was partially because we often think of mental illness without thinking of the people they affect and so hold stereotypes that anxious people are irrational cowards (I am quite logical and have had people consider me brave) or that ADHD people are irresponsible (Many people have found me to be quite responsible). More importantly for me, “coming out” like this on the internet where it might be seen by someone feeling alone with her mental illness is my tribute to a beloved friend who passed away two weeks ago. He was incredibly open and honest about having been on medication for depression since he was in high school and advocated for acceptance while breaking stereotypes about those with mental illnesses. His openness helped me a great deal in coming to terms with my own mental state and if my openness can help one person the way he helped so many, it will be a fitting tribute. He also loved animals and Monty Python.

3 thoughts on “ADHD, Anxiety, and Animals, Oh My!”