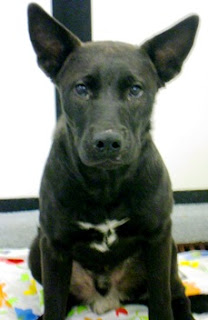 So I know that the actual lyric is horse, not tree, and while a lot of the assumptions do hold true for horses that exist for cats and dogs…my shelter doesn’t have any black horses to adopt out.

I went to a seminar tonight about Big Black Dog Syndrome (BBD). It’s an observable syndrome in shelters across the country, that big black dogs stay the longest and get euthanized the most in shelters. Black cats also stay a long time.

The talk was hosted by the Washington Humane Society and presented by a smart whip of a Masters candidate from George Washington University’s anthropology program. We discussed BBD from a historical/anthropological perspective, as well as how those aspects translate into the everyday at shelters across the country. It wasn’t all sad though. We ended by discussing the great success stories of BBDs who, due to their lengthy shelter stays, were able to earn their CGC certificate, learn awesome tricks, and end up in amazing homes as hearing assistance dogs, trekking buddies, and also family pets.

I had known of BBD before but hadn’t looked too closely into it and this was an eye-opening reminder of how much of our daily behaviors and choices are subconsciously influenced by our society.

We don’t think that we’re so affected, but we are and that’s why we need to always make sure to communicate with people and push strong, positive messages that encourage smart choices.

Comments like Chris Rock’s about how Vick didn’t deserve to serve time because it was just pits, who aren’t even “real dogs” don’t just sicken and disgust me because they’re wrong, but because there are people who listen. Because when people hear those comments over and over and over, they see a sweet pittie puppy and think “vicious” “unimportant” and decide not to adopt that dog who needs a loving home.

This weekend is Halloween when many of us will see people looking completely unlike who they really are. This weekend we will automatically look past appearances to see the real people underneath. I wish people could always do that with animals and see beyond Big Black scary Dog and see instead Big Bundle of Fun whose shed hair won’t show up on my black suit!”