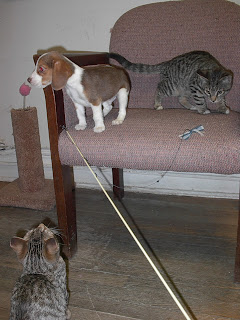 Most of the communicable diseases we worry about in the shelter can’t spread across species. So when there was one lone beagle puppy, Gulliver, and a litter of active kittens in the shelter yesterday, my friend and I were encouraged to take them all into the play room.

Gulliver loved the kittens and just wanted to play with them. He would lean down (demonstrating why Downward Dog is called such), wag his tail, and give a happy puppy bark of “let’s play!” The kittens usually responded by curving up, raising their fur, and running backward with a bit of a hiss. They did not know what this strange creature was and were not sure if they liked it.

Thankfully Gulliver didn’t seem to mind and began to play with the kitten toys. One brave black kitten began to follow Gulliver around, sniffing at him, and seeming interested without being aggressive. The other kittens came out from under the futon or behind the chairs as they saw the cat toys come out.

While Gulliver and these kittens won’t be best friends for life (Gulliver should be going to his forever home within the next two weeks), their small interaction helped all those animals to be a little more comfortable with other species. Dogs and cats can have similar body movements with opposite meanings. Exposure to the other species while young, helps an animal learn to read even those opposite meanings and interact successfully with others.

Today was the Inauguration of President Obama. It seems that everyone throughout the District is talking about change, bipartisanship, and getting along. Those kittens were afraid of that puppy at first, but they learned they can coexist peacefully. Let’s hope that people can learn the same lesson.