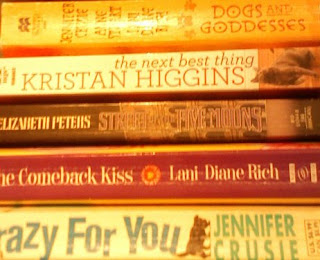 The other day, I picked up a contemporary romance collection of short stories about couples brought together because of cats. I thought it looked cute and it was under $2. Unfortunately, the stories weren’t my favorites, partially because of the cats and the people’s behaviors toward their cats. One heroine had a pure-bred, fully-intact female bought on a whim from a mall store. I would have a hard time holding my tongue if I met a real person like that, let alone a character in a story with whom I ought to be sympathizing. She didn’t even make plans to spay her cat after she was impregnated by the hero’s tom. I did like the hero (kind of, I thought he was wimpy toward the heroine) who A–had saved his cat from a dumpster and B–immediately fixed his cat the day after the accident and apologized for the incident.

The one story I did like involved a cat to whom a house had been willed who then saved the heroine from certain murder. I can respect that.

It got me thinking about animals in books and how they affect my enjoyment of a book and my sympathies for characters. I adore Jennifer Crusie’s books and many of her works involve characters who rescue animals, have rescue pets, and who judge others based on their animals. You recognize the hero because of how he interacts with those animals. “Dogs and Goddesses,” written with the amazing Lani Diane Rich and Anne Stuart, has the following line describing one of the heroes:
“Slayer of Demons, Greatest of Kings, Savior of Puppies”

How do you not like a hero with that description? That’s what makes our heroine start to fall for him.

Lani Diane Rich also has a book where you know the hero is a good guy because he saves all the animals from a burning pet shop at the start of the book, even though he’s trying to get out of town before anyone sees him. He knows that you have to save the animals.

Elizabeth Peters has her heroines and heroes form relationships with animals although it’s not always quite as cut and dry as “the guy the animal likes is the hero.” One of her heroes is hated by the heroine’s cat, but he’s the one who found the cat for her when she thought the cat was lost forever. He braved tooth and claw to help his beloved keep the cat she loved. That same heroine has a vicious looking but incredibly sweet dog she saved from a gang of criminals who kept him half starved.

I started Kristan Higgins “The Next Best Thing” feeling friendly toward the heroine half because the cat pictured on the front, back, and side covers looked identical to Toby and the heroine loved that cat.

A heroine/hero doesn’t need to have animals in her/his life for me to sympathize and identify, but it certainly helps and I cannot like a character who isn’t responsible or kind toward her animals.

Does a character’s relationship with animals affect your enjoyment and judgment of stories? Does a character treating animals well automatically signal to you that he or she is good and important to the story? Or is this trait contained to my personal brand of crazy?

All the books in those photos are from my collection and involve, in some fashion, animals telling you about the characters. They’re some of my favorites.