I have scared Toby (on accident!) before and I have given him the indignity of a bath. I have caused Toby to be upset with me.
However, within ten minutes he’s always back to being a happy loving kitty who wants me to know how much he loves me by purring as loudly as possible. Even when I brought him to the shelter to be microchipped and he was terrified of the noises and strange smells, he was back to his usual self shortly after we returned home.
Why do I mention this?
Because it’s been on my mind from the moment I woke up and debated whether I could wear silver flats with chocolate pants.
I had a bad day yesterday and was nervous. I’ve known plenty of people who hold grudges and I get nervous when I think someone might hold a grudge against me–regardless of whether I think they deserve to be mad at me. However, I resolved to be cat-like, not catty today.
You know what, it worked. When I started to get irritated I just thought of how Toby always gets past it when I frighten him, how Nik who wasn’t used to so much attention has recovered and doesn’t hold a grudge against humanity, and how Brody (a badly abused pit) was always full of love toward people.
Now, this is not to say we can’t psychologically scar animals and that they don’t remember. Anyone who has seen a dog or cat scared of a certain type of person or even people in general, knows that something awful has happened. But for the most part–pets just get over it. You’re nice to the puppy now, he’ll wag his tail as though you never accidentally stepped on it because you were in a rush and not watching where you were going.
I’m trying to do this in my life and at least today it worked. I’ll see if I can keep it up for the second part of Lent–approaching compassion by just getting over it like the cats and dogs I love can do. 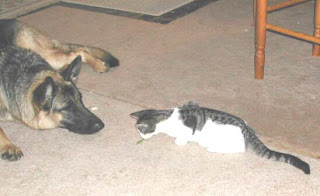