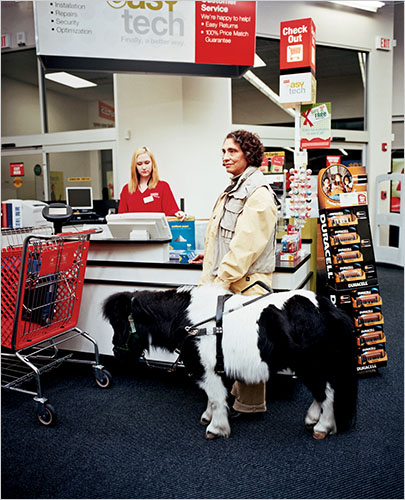 The New York Times magazine has a great article exploring noncanine assistance animals. I had heard a little about these helpers before but hadn’t realized the variety of animals used, nor the threat to their continued status as assistance animals. Also, the assistance miniature horse is rather adorable.

My friend’s mom in college was on her third guide dog, each one expensive and difficult to train. Also, her three sons became emotionally attached to each dog and had to decide what to do when the dogs were too old to be guide dogs. The last one was retired from guiding about a year ago an is now living with my friend in his apartment. She’s too old to be an effective guide dog but still makes a good pet.

If my mom ever went blind, it’d be near impossible for her to have a guide dog. She’s terrified of them. A sweet miniature horse however wouldn’t set off her fears and would still be able to help her. I thank God that she’s not blind, but if anything wful were to happen, I wouldn’t want her to not be able to get a noncanine companion just because some businesses had lobbied for species restrictions.

Animals can do a lot for humans, let’s not restrict which ones we allow to help us.