It’s been one of those special weeks where my boyfriend and I keep repeating “it’s a good thing they’re so cute.”

Monday, I stepped in one of Keen’s hairballs while trying to get ready for work and Toby was acting oddly that night. He was peeing every 15 min or so, racing between the litter box and a pile of typing paper.
Tuesday morning when I was getting ready for my own doctor visit, I saw that the spots on the paper were red. I called and got a vet visit for that afternoon. Keen had another hairball on the carpet–just missing papertowels.
At the vet Toby whined pitifully but was otherwise sweet to the vet tech (one we’ve had before and who has always been awesome) and the vet. His heartbeat was fine, his organs felt ok, and he was very modest and refused to, er, “extend” when the vet attempted to check his external organ. They were unable to palpate the urine out so they had to do a mini ultrasound to guide the needle.

Well, Jarrod had dropped me and Toby off while picking up prescriptions for me (he’s awesome and deserves tons of good boyfriend karma this week, seriously) and was reading in the lobby/waiting room of the vet’s office when the vet came into the exam room with the test tube full of bright red urine.

Apparently I eeped for 2 minutes straight. I know I scared the poor vet and Jarrod came back shortly after to make sure I was okay because he had heard me in the waiting room. I refuse to be ashamed of my reaction to seeing that my cat’s bladder was full of bloody urine. Seriously. I think that’s a sight to freak out anyone who cares about her pets.

We got the test results back Wednesday morning–sterile cystitis. If I understand correctly, this is vet speak for “we have no idea why your cat is sick but there’s obviously something wrong.” There was no bacteria, white blood cells, crystals, or anything other than red blood cells and urine. So he’s on anti-inflammatory meds and seems mostly ok.

I came home from work Wednesday night eager to clean because I was supposed to meet with a shelter friend on Thursday to discuss how the shelter could benefit from social media techniques (that’s what I do in my job that pays for these emergency vet visits) and found that Toby, the dear sweet love of my life, had managed to knock down 4 of the 6 shelves of my splendidly organized, dearerest-of-my-possessions bookcase. And broken 2 glasses. Ad cleared a table. And hid my boyfriend’s keys.

He’s currently curled up on my robe that he pulled down from the back of a char, looking sweet and innocent. He’s returned to only using litter, not paper (though we did put out an extra litter box which has helped) and his spots are getting larger and less frequent which I’m taking as a good sign. There wasn’t any fresh destruction when I came home today so I’m waiting for the other shoe to drop. And he’s accepting his meds. He dislikes it but doesn’t claw or anything which I’ll take as a win. 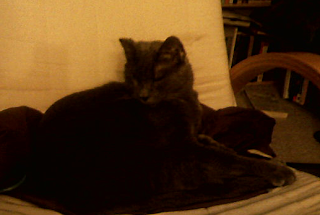 I’m choosing to see the wanton destruction as “see, I’m still healthy!” not “hahaha, you just lost your entire shopping budget for july at the vet’s office.”

Right? It’s the first. It’s gotta be the first. No way something so cute could be that dastardly.

5 thoughts on “Something so cute can’t be that dastardly”