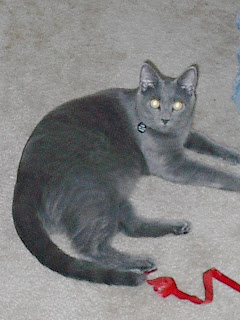 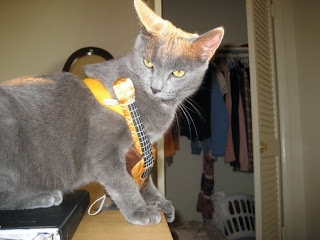 On the left: Toby as a svelte young cat. On the right: My beautiful currently tubby Toby.
My cat and I are both trying to lose weight. Well, to be more accurate I am trying to lose weight and Toby is really confused at the smaller amount of food showing up in his bowl and me making him actually MOVE for said food as a result of me trying to help him lose weight.

This dual project has me thinking about the similarities and differences between helping a cat lose weight and helping yourself lose weight. Both involve a lot of self-control, common sense, exercise, and some innovation.

Self-Control
For me, it’s not buying the Ruffle Cheddar potato chips that sing a siren song from the vending machine at 3pm every afternoon. For Toby, it’s not giving into his sad looks and plaintive meows.

To avoid the chips, I tried buying mini rice cakes. Verdict–not buying again. At first, I loved them and thought they were awesome, then realized I had eaten over half the multiple serving bag and had this weird chemical taste in my mouth. To boot, I was craving Ruffles even more than before. I’ve recently tried oatmeal. Microwaved with a bit of milk and a small amount of heavenly dark brown sugar seems to help get me past the hump.

To deal with Toby’s meows…reminding myself, and him in a perky voice, that he is NOT a starving kitty. And then throwing some toys or petting him until he gives up.

Common Sense:
For both of us: smaller portions, more movement. It’s so basic, I hate to say it, but it needs to be said. I also checked with his vet about how much to decrease the food.

Exercise:
Bribery and conscious argument with myself works. I know I need to exercise and only need to argue with my lazy bookworm brain in order to get off the cushions and lifting weights.

With Toby…sometimes tossing toys or danging his toy sticks work. Other times he just yawns. So I’m getting sneaky. Some days I toss his food a kibble down the mini foyer of my studio, making a noise when it lands, and he runs for it, then I toss one down the kitchen so he runs in there, “hunting” his food.

I also use most of his meal times as training times. I know it’s not a lot of movement to go from standing to sitting, to high fiving, to sitting pretty, but it’s some movement and it means I’m not neglecting his training while we’re currently swearing off treats.

Innovation:
For me? Not a whole lot. It’s all ideas I’ve read elsewhere or simply finding ways to put different workouts together so I work everything without getting too grumpy (I’m seriously perky at the end, but halfway through I just want to whine and stop).

For Toby this meant finding a way to deal with his habit of eating cardboard and plastic when he wanted food without rewarding him for eating the cardboard and plastic. During the day I can keep an eye out and my timing is good enough to distract him before he’s made contact with the cardboard. At night…I wake up about an hour before I need to and he’s trying to get to cardboard or paper. It’s better than it used to be. At first, he would wake me up at 3am with this. I realized I needed to feed him right before bed and then cover the box with a blanket to make it less appetizing. To deal…I have premeasured baggies of food so I can stumble out of bed, distract Toby, toss some kibbles in his bowl, and stumble back to bed without having fully regained consciousness. Is it perfect? No. Is it the best I can do in a studio where I have foster kittens who would otherwise eat any food I left out overnight and find and devour any interactive toy I left out with food? Yes. So much better than 3am or actually measuring at 6am. I consider this an innovative improvement.

So far we’re both making progress. Toby feels lighter and I feel healthier. That’s what it’s all about, both of us being healthier and better able to play and enjoy our days. That’s worth a little effort and self-control.