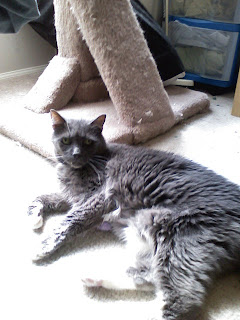 It’s been a long week and a long Friday (I got stuck in an elevator this morning. It was dark and small and I’m claustrophobic) so I elected to stay in for a chill Friday with the cats. Picked up an iced coffee at Silver Spring’s Kefa Cafe and some books from Silver Spring Books (seriously, my favorite used bookstore, I’ve gotten some great cat/dog reference books there in addition to fun reads).

So I’ve been playing fetch with Toby, petting Keen, and reflecting on where Keen is now and where he needs to be in the future.

He sometimes shows affection and comfort but then reverts to old man cat. It was great the other night to wake up midway through the night, start petting a gray cat on the bedside table and suddenly realize “holy! this isn’t Toby!” and then later have him leap up on the bed, right next to my head, on his way to the table. Unfortunately he hasn’t repeated this, at least not while I’ve been around and awake.

I have woken up to him staring at me from the floor and leading me to the kitchen as soon as I start to sit up. He’s like me–I want coffee first thing in the morning, he wants food.

Unfortunately, he’s been to two cat adoption events and hasn’t gotten even a nibble. He was sweet at the first one and was nice to people when taken out of his crate but spent the second one staring at the garden instead of the people. He has a profile on the shelter site and I’m taking him to events, but he’s not getting interest.

And I understand, I do. He’s fifteen, he needs regular brushing, he only eats wet food–he’s going to need a really special adopter who understands him and will nod back at Keen. Fyi, in my opinion, Keen’s cutest behavior is when he nods at you like “that’s right, I’m the Keen, you’re the person, do it” but I’ve been accused of anthropomorphizing at times. He’s a great cat with a cool personality, but he’s not a super affectionate guy. He’s fifteen. He’s loved and lost. He needs someone great who can love him and understand that underneath the meows, is a cat who just needs some affection and attention in his life.

He’s an old cat who wants to sit in the sun, play a little bit when he wants, eat some good food, and get chin scritches before falling asleep. I just need to find the person who can provide that.

4 thoughts on “What Keen Needs”