Many people who live in the DC area live in apartments. If they want a pet, they want one who doesn’t have to go outside in the winter, can be trained, is soft and cuddly, is quiet, and (most important with all the restrictions apartment buildings have) doesn’t weigh a lot. 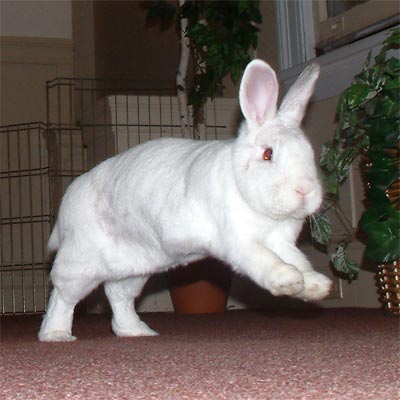 Why aren’t all these people going out and adopting bunnies?

Many shelters have house rabbits for adoption and you can find a ton in your area through Petfinder.com and Adoptapet.com.

Need to convince the love of your life why you should adopt a rabbit?

If you do decide to adopt a rabbit, please contact your local shelter(s) and, if the shelter doesn’t do it for you, get your rabbit neutered. It’s especially important to neuter male rabbits to avoid the massive sprays they can otherwise be prone to. And you want to fix your female in case you decide to get a pair–because the old sayings about a couple of rabbits, sadly are pretty true in that case.

When I was first learning about rabbits, my friend Diana suggested I look through the resources at the House Rabbit Society’s webpage and I suggest you do the same. They’re a pretty awesome group that has a ton of wonderful resources for both new and experienced rabbit adopters alike. Plus they help save rabbits who are surrendered to shelters when people tire of their kids’ Easter surprise.

Which brings me to the depressing portion of today’s post. I’m incredibly grateful that my parents gave me a stuffed toy bunny on Easter when I was little (known as both “Baby Bunny” and “Green Bunny” because of my very literal naming at that age–she is baby green with a white stomach and face) and not a real rabbit. As we get near to Lent which leads to Easter, please tell anyone looking at giving a real baby bunny as a gift to wait and take the kids to adopt a rabbit from a shelter together.

*For those who know my not-so-secret love of Whedon’s television shows, I’m sure you understand my struggle to not name this post “Bunnies! Bunnies! It Must Be Bunnies!”