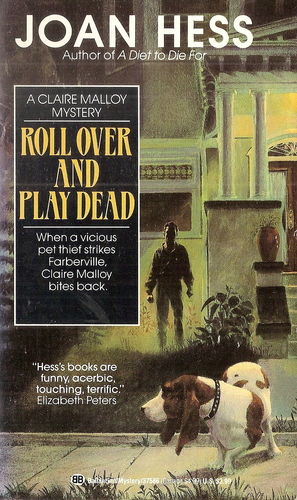 Rereading this at the age of 27 was quite a different experience from when I first read it–probably age 9 or so and while I liked animals, definitely not aware of what I was reading about. Also, 9 was not the target audience but I suspect stealing my mom’s Joan Hess and Elizabeth Peters novels made more sense than declaring at my 8th birthday party that Murder She Wrote was my favorite television show. Certainly it wasn’t any less weird than also stealing her Silhouette romance novels.

This mystery novel is one of Joan Hess’s early books in her Claire Malloy series. Claire, who runs an independent bookshop in a college town in Arkansas (Do you remember those things? The shops, not college towns. In addition to “Beth’s Best” a diner with awesome burgers, I also daydreamed about owning/running my own bookstore as a kid), is the heroine of our story.  When the beloved pooches she and her daughter are dog-sitting go missing, Claire finds herself investigating theft and murder.

This book is a little dated, but still great reading. The story moves along with compelling and humorous characters. As for the animal issues, the good completely outweighs the negative. Find a copy, then grab some treats and convince your animals to cuddle with you while you read it tonight!

For more reading
On Class B dealers:
Humane Society of the United States
U.S. National Library of Medicine National Institutes of Health
Slate.com’s multi-part story on the theft of Pepper, a family dog
On Pit Bulls:
Bad Rap
Best Friends

2 thoughts on “Roll Over and Play Dead: Great Plot and Good Points”